We had been fishing that morning, on a clear winter day in Southern California, at a beach near Malibu, 1975. I had caught a fish, and Sensei * helped me to reel it in. Our fishing group consisted of about fifteen people including Mrs. Ikeda and several Soka Gakkai leaders, all gathered together on the beach around their President, Daisaku Ikeda.

Although the occasion was for relaxing, fishing and enjoying the beautiful beach, it was difficult for him to act casually with so many people watching him closely, and so he began to walk down the beach away from the crowd. I followed him, gradually increasing the distance between ourselves and the others as we strolled on the beach near the surf, just three people – Sensei, a photographer, and me.

* Note: Sensei is a Japanese honorific term for “teacher” or “mentor”, and is universally applied to teachers as an offer of respect. For members of SGI, Sensei refers to our mentor, Daisaku Ikeda.

Sensei was in deep thought. His concentration focused, his thoughts so absorbed that when a large wave crashed onto the sand near him, and the water rolled against his legs above his knees, he did not seem to notice. He seemed not to feel the sudden shock of cold water, or move suddenly to avoid the wave, but stayed concentrated on his thoughts in a way I found highly unusual. He seemed not to notice that he had just been plunged into an ocean wave. I have not witnessed such absorbed concentration at anytime in anyone else.

Still deep in his thoughts, he turned slowly and began walking back towards me. That’s when the photographer snapped this image of Daisaku Ikeda walking in the surf, his pant legs wet from the wave that had just caught him unaware. I have kept it as a memento of that special moment, and a reminder of the extraordinary concentration of the man who has been my mentor for my adult life. I have always questioned and asked myself, “What must he have been thinking about with such intensity that he didn’t seem to notice when an ocean wave crashed around his legs?”

Over the ensuing years, I have often considered this question about our shared moment together, captured in that photograph. “What was he thinking?” 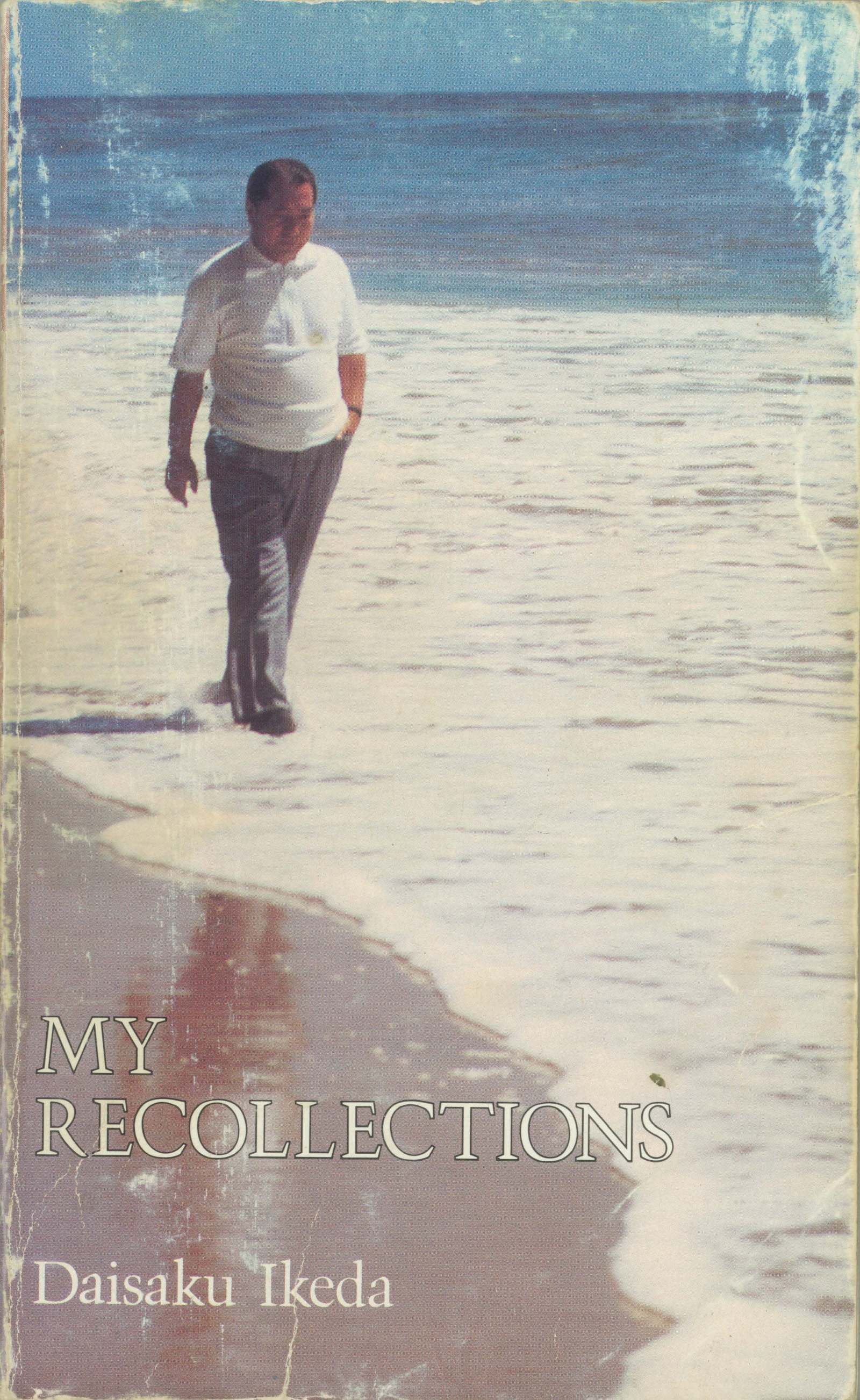 This photo appeared a few years later as the cover photo on a book entitled “My Recollections”, published by the World Tribune Press.   This book is a collection of essays derived from Sensei’s recollections of his life until that time. It carries the story of his father and his family of seaweed farmers; of the tragedy that befell his family and his nation with “The Clomp of Military Boots”; of sad memories of his mother; of his meeting with his mentor, Josei Toda, and the establishment of Soka Gakkai in the turmoil of post-war Japan; of the great effort he exerted beside his mentor and their struggles with authority; of meeting his wife and marriage; of the death of his mentor and his inauguration as the third president of Soka Gakkai; and of his early travels to spread the Buddha’s message of hope around the world. Perhaps this is what he was thinking about in that moment of intensity captured in the photograph – about his recollections and how he might convey them to future generations.

There are other possibilities to consider about his concentrated thoughts in that moment. He had just received news that his scheduled visit to Brazil – for which his visit in Los Angeles was intended as a stopover – would have to be cancelled. The military government of Brazil, which seized power in a coup and ruled the country with dictatorial control, had denied him a visa to enter because they suspected him of being a threat to their authority. Because of his leadership of a Japanese organization with thousands of members in Brazil, they arbitrarily assumed that he posed some kind of danger. No good explanation was ever offered.

This was a considerable blow to his followers in Brazil, who had planned extensive activities and waited with great anticipation to welcome their mentor. Sensei could have been contemplating this upsetting and challenging news when the ocean wave crashed around him. He may have been considering how he would encourage the Brazilian members not to be defeated, to fight on, and to change their situation from “poison to medicine”. One decade later they would do just that, and welcomed their mentor as a respected guest of their country with large celebrations that are fondly recalled today.

On that fateful day of the photograph, he had recently received this distressing news, cancelled his trip to Brazil, and gone fishing with me. His fearless concentration that day may have been a reflection of his determination to support the Brazilian members in their brave efforts to transform their country.

The founding of Soka Gakkai International (SGI)[6] may have been on his mind that day, but that would not occur until a few weeks later in January 1975. The flourishing of SGI to include 192 countries and territories today was unimaginable then.

The future events and accomplishments of Daisaku Ikeda’s life were not imaginable on that day – except by him. His writing career had only just begun, and the more than 100 books he would write, ranging from Buddhist philosophy to biographical essays, poetry, children’s stories and photographic collections, were still emerging in his mind.   His published dialogs with such great philosophers and leaders as Linus Pauling, Mikhail Gorbachev, Elise Boulding, Joseph Rotblat, Bryan Wilson, and André Malraux had not yet occurred.

The Soka school system, had been inaugurated in Japan but had not yet seen its global extensions, to include Soka University of America in California, and many schools of “Daisaku Ikeda Education Studies” in universities around the world. India’s Soka Ikeda College of Arts and Science for Women, and Brazilian, Korean, Malaysian, Singaporean, and Hong Kong Soka Kindergartens are examples of the independent institutions inspired by Ikeda’s educational ideals.

The famous addresses, publications, and collaborations hosted by great universities around the world, such as Harvard University[2], Columbia University[3], Oxford, Moscow State University[4] and University of Bologna[5] would be presented in future years. And the academic honors that would follow, today more than 355, granted from universities spanning the globe, would pour upon him as a flood.

And so would the attacks, rejections, betrayals, and slander that would assail him in coming decades. Betrayed and excommunicated by priests; attacked by politicians, lawyers and associates who plotted against him; resigned from the organization he led and helped to establish; slandered by the Japanese yellow press and disgruntled backsliders; and falsely accused in criminal court; Daisaku Ikeda endured the fate of all who challenge authority, who act on the side of the people, with complete composure and confidence.

In the ensuing four decades following that Brazilian refusal Daisaku Ikeda has overcome all, prevailed over every criticism and slander, conquered all obstacles, and emerged as the victorious world figure he is today. In so doing, he has given encouragement and hope, positive and thorough guidance, and illuminating inspiration to many millions of people of our world.

Perhaps he was concentrating on the future that day at the ocean – on what he would accomplish and how. Perhaps he was making a determination in his intensely concentrated mind. Although I will never know for certain, my intuition tells me that he was thinking about his mentor, Josei Toda, in that moment of intense concentration.

Every speech, every writing, every dialog, every encouragement from Daisaku Ikeda includes references to Josei Toda. His lecture series and writings on philosophy, education, peace, and culture begin and end with deferential reference to his mentor’s advice. His absorption in the memory and determinations of Josei Toda are as if etched into his mind. I feel confident to assume that in that unplanned moment, with the ocean crashing around his legs, Daisaku Ikeda was concentrating on the life and determination of his mentor, Josei Toda, powerfully, together, united as one.

[5] “Leonardo’s Universal Vision and the Parliament of Humanity” (1994, University of Bologna)

[6] Soka Gakkai International (SGI) is a global association of lay Buddhists. As an NGO in consultative status with the United Nations Economic and Social Council, it cooperates with the UN in a variety of humanitarian and public information programs. Membership includes more than ten million members in Japan and more than 1.7 million members in 191 other countries and territories worldwide. (http://www.sgi.org)

2 thoughts on “What Is This Man Thinking?”