“The great sin of Enlightened Europe is to allow the women of Greece, the mothers of freemen everywhere, to be forced under the veil by the Turks.”  – Lord Byron

Ghosts of the Desert

In the dim light of night traffic, in cars driven by men – always driven by men for the ghosts, of course, are forbidden to operate motor vehicles – their eerie apparitions appear out of the darkness of the back seats.  It’s always jarring to realize that the male driver is not alone in the car, as unnatural black-shrouded countenances come into focus peering through the darkness inside.  The ghosts are only discernable as living beings by their eyes, the barely visible parts of their human anatomy, while all else is obscured by black shrouds, and black veils across the faceless, making them seem for all intents and purposes to be non-beings,  black figures of  mystery without form or shape, nothing to behold except upright black cloth.

They venture out at night for shopping, one of the few outside activities allowed them, and travel in groups to the malls and grocery stores, always stewarded and chaperoned by men. Though they can often escape their male shepherds to wander unrestricted in shopping malls and grocery stores, they are always dependent on men for transportation and chaperoning.  They shop for the usual household items and for sexy lingerie, expensive shoes, party dresses, perfumes and jewelry that no one except for their women friends or their male relatives and husbands, for whom such feminine sights and smells are reserved, will ever see. When every activity stops for prayer, five times each day, and the men traipse off to the mosques to appease their wrathful god; the women, whose presence in the mosque is always oblique and un-noticeable, prefer to sit and wait.  Long rows of exhausted ghosts idle the time outside in the intense heat, in their black robes and veils, waiting for their men to finish the required ablutions.

They rarely appear during the heat and intense light of the day, and if they do they are quarantined from any incidental interactions with non-relative males, separated by absolute boundaries from the men who fear and control them with punishable rules.  Waiting rooms are gender specific, even in hospitals and pharmacies.  They never eat with men in public restaurants. They do not work and have no engagements outside the home.  They are expected to live cloistered and boring lives as chattel and domestic breeding stock, while men alone are allowed to venture into the active world outside the home.

The heavy black shrouds are nowhere more incongruous than at the swimming beaches, where the black ghosts wander on weekends into the sea as dark sea-creatures, cloth billowing into the water to make them seem larger than human, great blobs of shadow floating and emerging as formless apparitions, like black walruses floating at the water’s edge. 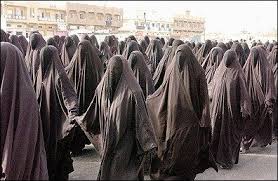 They are not supposed to look at men, but naturally they do.  It is quite beguiling to catch their almond eyes photo- snapping the forbidden male countenance, quickly to divert and to look down at the ground; the smoke of forbidden pleasure wafting into the past.

Women are the objects of strange passions, repressed sexual desires, among the Saudi men.  For one, rape fantasies are apparent in the apprehension of men to allow women to drive or otherwise act freely:

“What will I do after my sister is raped?  Sell her car to fix the situation?  Or cry that I didn’t drive her myself?  Do I commit suicide?  I love my sister, my mother, and my wife, but I will not expose them to the considerable risk involved, compared with the relief of driving them myself.”

“A girl was riding an ATV out in the open in the Thumama desert.  Some young men caught up to her in their car, taking photos of her body and its charms.  She screamed when they intercepted her, taking her by the hands to an unknown place.  This story is not a fiction.  It’s on YouTube under the name “Chasing Girls in Al-Thumama in Riyadh”

From comments posted in June, 2011 by members of the Facebook groups opposing “Women2Drive,” an online campaign to lift the ban on women driving in Saudi Arabia.

The logic, if it can be called that, of severely restricting women in their clothing and public activities is based not, as many assume,  on the idea of feminine modesty. It relies on the Koranic assumption that men cannot be trusted to contain their lustful desires in the presence of such distractions as women’s hair, laughter, legs, or lips.  The assumption is of male lust, uncontrollable and even excusable (rape is often excused in Islamic (Sharia) law as “provoked”) in the presence of overwhelming female temptation.

Even the suggestion of a feminine ankle or wrist, not to mention uncovered hair, is enough to send paroxysms of religious prudery through the Mutaween, known infamously as the Hey’a, the ever-present religious police who make it their business to enforce the strict Salafi Wahabism of Saudi Arabia’s ruling fundamentalists.

Everywhere the sense of prudery, resistance to exposing any skin or body parts, harassment of women for religious indiscretions such as speaking to a member of the opposite sex in public, is remarkable for its oppression of the mind and senses.  The denial of the body, especially the denial of the allures of the female shape, is a twisted form of religious eroticism, well-documented in the West, which exhibits its inevitable power in extreme sexual attitudes and desires, like sadism and rape.

Most of all, it is the daily humiliation of the veil that denies personhood to women.  In Saudi Arabia as in other strict Islamic conditions, women are not supposed to have a public persona – no female personhood viewable to males other than their relatives.  They are not to speak to or experience the company of male adults not related to them.  This hypocrisy, to be sure, is widely circumvented, especially by the youth, but not without the threat of severe punishment or even death.

Although many of Islam’s women may claim that they “prefer” to cover themselves with black cloth in the heat of the desert; or that Islam’s proscriptions against women’s features, skin, or voice are not evidence of discrimination – the known facts of rebellion against the veil, and the cruel persecution of women for asserting their basic human rights stand as a contradiction of their arguments.  The obvious condition of women living as ghosts under Sharia conditions, whether in Saudi Arabia or Iran or anywhere in the equatorial countries of Africa, is a contradiction of the disingenuous claims of those who would claim that they “like it”.

In daily living, the shroud-like burkha and veil create an unmistakable oppression, for men and women, on the natural human desire to express and show one’s personal identity in public, and to observe the personhood of others in their appearance.  It is a tyranny of men over women, with men only allowed to make the rules which govern the moment-by-moment existence of women.  It is only part and parcel of a wider tyranny of Islamic conditions that threaten the assumed freedoms and liberty of personhood exemplified in modern Western countries and even Asia, once a bastion of misogyny. The extreme misogyny of Islamic despotism, as practiced under Islamic conditions in Saudi Arabia, Iran, and other Muslim states, is a threat to human freedom everywhere, and no equivocation on this issue should be tolerated by those who love and fight for liberty.

2 thoughts on “Ghosts of the Desert”